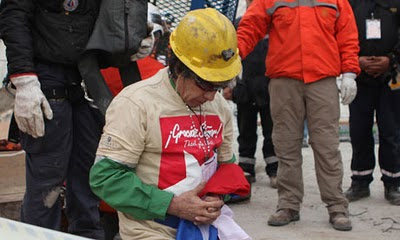 The Teresa Carreno Youth Orchestra were amazing and I am so glad we took some boys to hear them. An enormous orchestra, but cut down for softer passages and without doubling wind solos. Fantastic ensemble, the type you only get with a truly great professional orchestra and enormous energy for the entire performance. An instant standing ovation at the end and exceptionally for the RFH, where people start leaving the moment the applause begins, everyone stayed for the 30mins worth of cheering and encores. I'm still hearing it now. Always a good sign.

The tracksuit tops? We were in the front row of the choir stalls and I think six boys got one (inculding one I caught!), so off they went home in Venezuelan colours.

This a speech from the founder of El sistemo, the means by which 250 000 Venezuelan children receive music tuition, many of them from very poor backgrounds. One of there number is now music director of the LA Phil another a double bass player in the Berlin Phil (probably the best orchestra in the world.)

Could it work in the UK? Well there are schemes about the place, notably in Liverpool. Of course post war we had excellent music services, well supported county youth orchestras, county music awards for young musicians to attend conservatoire junior departments....lots of people from all sorts of backgrounds at music colleges and then into the music profession and then we had local managament of schools in the late 80s which meant that the delegated budgets to councils no longer had a sum to be spent only on music. So the people, the instruments, the culture of excellence of having to practise for years, working your way through different junior orchestras before you played for the county, got to go on tour, maybe play at a famous concert hall, all that got a lot more tricky. It means that 75% of students at the Royal Academy of Music are from the independent sector. It means playing expensive instruments like the bassoon, the horn is very tricky. Maybe you don't what those instruments are anyway.

Look at the Chileans. A bit of esperanza...
Posted by leutgeb at 08:08