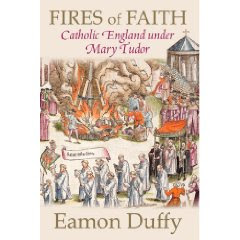 After the tip off from Ttony (Ttip off, in fact, ) I happened upon it in a book shop yesterday. Everyone else should be clever and get it from amazon 'cos they've knocked off £6...
Anyway, it is an excellent read. Bara brith says yes to revisionist histories of the Deformation.
To wet your appetites.
Duffy on the sixteen Bishops inherited or appointed by Queen Mary.
'The Henrican survivors included... and one classic timeserver who would doubtless have become a Hindu if required, provided he was allowed to hold on to the See of Llandaff: Anthony Kitchin was the only Marian bishop to willing to swallow the Royal Supremacy and serve under Elizabeth as well.' p.23
Duffy contrasts this with things under Henry VIII when we all know who was the only one not to go along with Henry's interesting take on religious authority in England and Wales.
At the moment he is waxing lyrical on Cardinal Pole.
An aside. When my Mother was at school Cardinal Heenan visited. Apart from the moment their Music Teacher was doing the final final final run thro' and His Eminence walked in, only she couldn't see as she had her back to him, but the choir could... and you wonder why Music Teachers have nervous breakdowns. Thankless is putting it kindly.
Later that same day he was speaking to a group of girls and said that if anyone could name the person who originally owned his ring, he would give it to them. One Mother Ethelburga, a descendent of St John Rigby, kept murmuring 'Cardinal Pole,' but Cardinal Heenan apparently didn't hear.... and then announced 'Cardinal Pole!'
The parallels with today are ... interesting. The need to re-educate the laity. The episcopate packed with university educated theologians. Laity given the opportunity to discuss their scruples with experts in their deanery and finally the bishop, so that all could be brought back to Catholicism.
Posted by leutgeb at 18:57

I have Duffy's other books Leutgeb, but they are quite learned for someone with only a routine knowledge of these deep matters. As for educated laity, I am often astounded at how little most of them know. I blame the Novus Ordo of course. Go to any parish church and mention Summorum Pontificum, and they'll look at you blankly. Perhaps the priest knows, but is either too liberal (and therefore too wicked) or too scared to implement the much-needed changes. Meanwhile, they just go on with their want-of-Liturgy, and sing their silly hymns...sorry if this seems a bit much!

I find Duffy's writing style very engaging and vivid. This is no heavy going academic text, though it does have lots of ends notes and is obviously extremely well researched by an (the?)expert on the period. He brings it to life and refutes the commonly held attitudes to the events under study. It's also very short at a few more than 200 pages of actual text.

As to the rest of the world, if you do not engage with any Catholic electronic or print media you could easily know nothing of SP. Coupled with decades of, 'Back in the bad old days....' attitudes, it's easy to see how things are the way they are.

Frustrating as that may be, for some people change needs to be gradual others like it to happen overnight. Either way, speaking as one well able to 'go off on one,' we have to be patient with each other and just do our little bit. Other people....

At least you've never had to play all that ghastly music!

Thank you very much for this tip off. I, too, am a fan of Duffy having been bowled over by that evocative title, "The Stripping of the Altars" -which encapsulates that feeling of permanent Good Friday one gets on visiting one of our medieval churches now in Anglican hands. There were others before him, like J J Scarisbrick, but Duffy's great strength is in the way he piles up the evidence. I can hardly wait for my copy of this work!

'permanent Good Friday' what a wonderful.

What a wonderful phrase.

Thanks for letting us know of this. What a shame it isn't released my side of the pond until 15 September :(

Amazon UK if you can't wait?

I may end up doing that. Though an increase in patience wouldn't harm me..