Just discussing with the retired organist some bits and bobs - apparently a few bit of music have to get played n sung between now and next Sunday lunch-time, after which I shall retire into a lake of chocolate - and I have to play a blast between the Priest intoning the Gloria and the rest of it being sung, whilst bells get rung on Thursday.

It's just the sort of this which if you are not that person blasting away, you just don't need to notice terribly much. I hoped this would mean that I could acquire another secret chord formula, but no it seems I must compose my own. Somthing that my Music Teacher at school would have referred to as con belto.

Any offers? - nothing too Messiaen, just a few major chords will do....Maybe a succession, mmm
Posted by leutgeb at 21:49 6 comments: 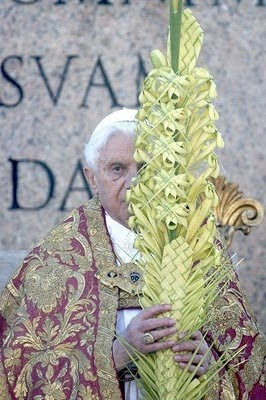 You know those people who can take a palm and fashion it into a cross? Maybe you are one?

Someone did it for me today which was very good.

I shall be suggesting this next year.
Posted by leutgeb at 16:36 No comments:

If come mid-Sept when the Holy Father arrives in the UK any of the journalists currently calling for him to resign/aplogise for things he has not done and is not responsible for feel that they really don't want their seat in Westminster Cathedral or Westminster Hall, I'll happily go in their place.

I could write lots and lots and get some quotes from other people who actually wanted to be there.

Just pop a comment in the comment box and I'll be along.
Posted by leutgeb at 16:27 No comments: 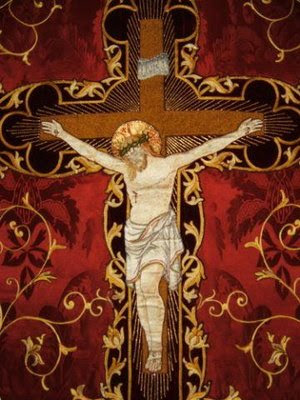 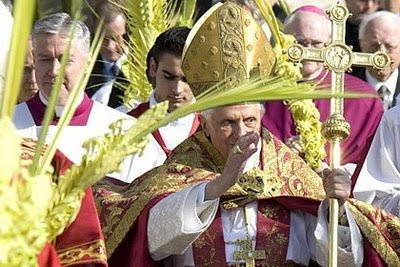 So it's up with the Knights of St Columba, 'This is Holy Week' poster and a little picture of the Holy Father in my window. Don't want anyone having any doubts about where the loyalties of this household are.

There is a primary school fifty yards from my front door, so plenty of people walk past....

Yes Fr Ray, you do recognise the picture.
Posted by leutgeb at 08:17 No comments:

A crotchet from disaster

Got through yesterday's biggy concert.

Having worried that I may spook the orchestra at the final rehearsal, they did it to me and we had to go back twice over a passage. One false entry and the whole thing would have ground to a halt in maybe four bars, which at the speed we were going isn't very long at all. Not so much trickle down as flash flood. Whilst I did not therefore enjoy the performance as the players did, there being rather too many people to look at, not all of whom returned the compliment, the audience seemed happy enough, including the scary parents.
Posted by leutgeb at 21:28 2 comments:

1 Brahms and Bruckner
2 Faure and Poulenc

and next week
3 Part and Gorecki.

Just watched Faure and Poulenc and if you can put your own gloss on the Catholicism and ignore what I call the, 'Was Schubert gay?' school of musicology, (that was a rhetorical question, as I say to my pupils, often with great haste, and therefore requires no answer,) the music and the locations are great.

The gloss on Catholicism is funny, because just how do you explain the fact that all this lovely music was created for a religion we are all supposed to despise?

PS some of the Faure sounds just like the Cesar Franck symphony I was rehearsing this pm. But then the Rutter Requiem sounds like Star Wars. Say that to a Rutter fan and watch the twitch of recognition flicker across their face. You know it's true!

Also, in a claim to fame, the lady horn player in the Symphony of Invention or whatever Harry Christophers calls his band has given me a few lessons and is excellent!
Posted by leutgeb at 20:07 4 comments:

Where do they get them from?

The 'let's fill up the last minutes of the Today prog' slot.

PS I'm single and I'm fed up of people being rude about people who aren't married.

PPS Does the present situation mean that the Pope is in fact responsible for any sin any of us commits in any situation?
Posted by leutgeb at 08:55 4 comments:

One of the great things in life is staying with friends and getting to see places.

Thus when The Times today begin to speculate on the cost of the forthcoming Papal Visit - The English know the cost of everything and the value of nothing - we learn that he will be staying in 'Church property.' I hate the use of the the p word because it denotes possessions and money and status rather than home, family etc.

Anyway, The Pope will not be staying at any Royal Palace, but I hope with friends and I hope and am sure with people who look after him and who, in a phrase a friend used to use about me, 'cook him nice dinners.'

When he visited the USA, he said to the lady who cooked for him that she had captured the flavours of his Mother's cooking, which struck me as quite the best and kindest compliment that you could pay to anyone's skills in the kitchen.

Someone, somewhere is planning those dinners...
Posted by leutgeb at 19:36 No comments:

as the battery in my watch gave up last night.

When I mentioned this to my recovering-from-big-op relative today he pointed out Big Ben clearly visible from the window of his ward. Time you can rely on.
Posted by leutgeb at 19:33 No comments: 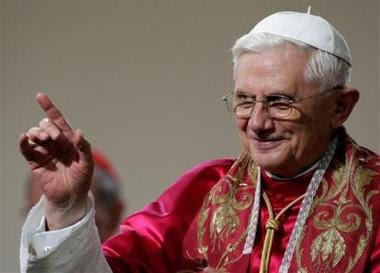 so it must be time for a bit of Pope bashing.

Remember last year? That was the Bishop Williamson debacle. It coincided with the new rose vestments and we don't need to revisit that story, except to say that they are very rose and very beautiful.

The media forget (or don't know or don't want to know,) that Joseph Ratzinger had a cousin the same age as him who had Down's Syndrome. That cousin did not survive the war. So the Pope has direct experience of the Holocaust, as applied to disabled children.

I'd wondered before what it would be like to be a relative of the Pope in the current climate. JPII had no (or very few, a cousin or two?) living relatives. BXVI has a brother, a distinguished musician.

This is the Pope who met with the survivers of abuse in USA and Australia. Hardly the actions of one trying to avoid the situation.

Still, given that 350k people managed to get to the St T of L relics and that all broad sheet newspapers have declining readerships, you do wonder how much sway they really hold. Maybe that explains the descent of the content into ever more lurid speculation.

Anyway, we need not fear that a sharp analysis of facts will cloud the view of susequent articles in newspapers. Makes you wonder the accuracy of much of what you read.

BTW I think the Press Complaints Commission say that the Pope himself has to complain where he is allegedly being defamed. That's one of the reasons that cartoon was fine and dandy.

I hope that when he visits in Sept we will all have a poster to put in our windows.

I welcome the Pope to Britain.

Like the the Holy Week posters.
Posted by leutgeb at 16:48 No comments:

for a relative of mine who is having a serious operation.

Ill relative is getting better. Hoping to be home sometime next week, then a couple of months to get totally better.
Posted by leutgeb at 00:00 1 comment: 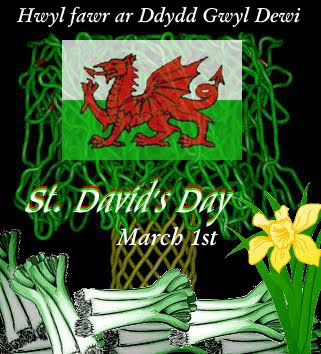