I don't believe St Thomas More actually said that, but if he did it just goes to show that heroic virtue can have its blind spots. (Typical anglocentric world view. Hah all the more mountains and beaches and Welsh lamb for us!)

Yes it's time for the land of song, mountains, Wales Today, S4C, weather permitting a trip to Bardsey Island and bara brith! Oh yes and St John Robert's family house near Trawsfynydd, so much more than a lake and a nuclear power station.
Posted by leutgeb at 20:18 2 comments:

After yesterday's story about a priest in NIreland who was allegedly involved in a bombing which killed 9 people in 1972, but who died in 1980, I thought it time for another positive story.

(To be clear, yes if you murder people you should be arrested, tried and if convicted, sentenced to life imprisonment.)

My parents had the Ghanaian Priest supplying in their parish over for lunch on Friday and apart from telling us about ploughing using oxen when he was a missionary in Nigeria he told us about what happens if twins or triplets are born in that tribe. (The tribe in question moved further and further inland to escape slave traders and ended up in a valley surrounded by mountains, toiling poor, rocky soil and were unknown to the outside world 'til about fifty years ago.) The people are very frightened by multiple births and think it is a bad omen. He didn't make it totally clear, but your survival chances are not great if you are a twin. He described being woken in the night because triplets had been born, rushing out with some parishioners to rescue the babies and taking them to a clinic as well as making sure the mother knew where they were. They all survived and judging by the way he was showing their height, are about 7/8. He was there for five years and he didn't say how many other babies he saved. Now he just teaches in a seminary, is the bursar there, teaches in two schools and is a chaplain to one. Oh and in the Summer supplies for a month in my parent's parish.
Posted by leutgeb at 23:56 No comments:

Later than last year they are ripe and so next week, I shall be making my year's supply of jam, that and cutting back the tall grass on me allotment.

The Allotment Police have swooped again and though the plot next to mine has been uncultivated all year, my meagre patch of weeds is infringing the terms of my tenancy, by causing a nuisance. How naughty! I just don't have the Protestant work ethic it seems.
Posted by leutgeb at 16:59 No comments: 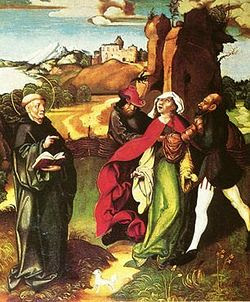 Classic/classique
Posted by leutgeb at 22:32 No comments: 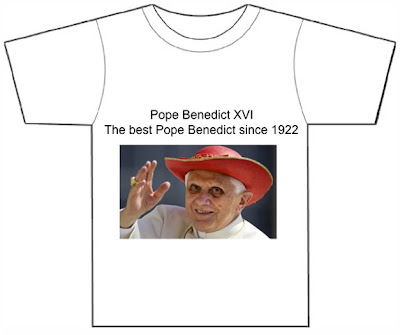 Taken from The Guardian's CiF T shirt competition.
No link, 'cos some of them aren't all that pleasant.
Posted by leutgeb at 18:18 No comments:

It's been a while since we had any orchestral music here and in light of the A Level results on Thurs and the Mahler centenary this year, time for my U6th soundtrack, Mahler 10. It's bit like Mahler 9, but without the happy ending, or beginning.

I particularly like the fact that you can take so many different contrapuntal threads through the work. That and the way he practically smashes tonality on the way. All hail Derycke Cooke who completed it in the 60s after Alma Mahler died.

Here with the Vienna Phil and Bernstein with groovy Viennavalve horns too.
Posted by leutgeb at 21:09 No comments:

Pope Benedict in Southwark team visited today - see link at the side. They are busy promoting the visit and clearly have a frenetic time ahead.

R4 had plenty of willing young interviewees after Mass and I'm looking forward to hearing them whenever the programme is broadcast.

As the organist, I'm now knackered.
Posted by leutgeb at 17:46 2 comments:

To the Proms - nearly

Austrian friend and I attempted to get tickets for the English Baroque Soloists' Brandenburgs at Cadogan Hall yesterday, but were at least 70 people away from the Box Office when the stewards called time. We consoled ourselves with coffee in Peter Jones where others more lucky flaunted their programmes. You just don't need to see pics of John Elliot Gardener at that point.

Having sorted out the location of various places for this friend who is now on a singing course in London we went home and watched the evening Prom on the TV and the played Brandenburg 2 in the interval, so all was not lost. Strange lack of rit or pause at the end. Unclear whether that was intentional or whether the trumpet player was about to explode.
Posted by leutgeb at 17:33 No comments: 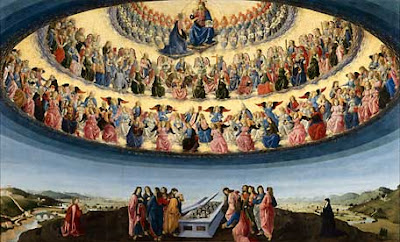 Seeing as I'm being quoted on little old lady daily Mass goers having more of a handle on Catholicism than the Tina Beattie's of this world, that's not because they may not be great intellectuals, because some of them will be, but because whilst other people are going off at tangents and fashioning the Faith to suit themselves, they are gettin on with doing it.

You can be a great Catholic and be
very clever
very stupid
very average
very athletic
very disabled
20/20 vision
completely blind
a virtuoso musician
tone deaf
come from any country
speak any language
be a Nobel Prize winner
be totally unknown etc.

All fine. We aren't all the same and that's as fine as fine can be.

Being slightly educated and trying to reason your way out of stuff that you find difficult or unpalatable, is not fine and history says won't end well.
Posted by leutgeb at 16:55 2 comments: 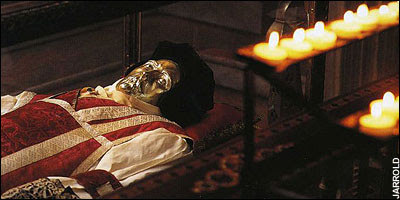 Picked up a copy of 'The Pope in Britain; Preparing for the Visit with Prayers & Devotions,' to day which contains this by St John Southworth.

St John Southworth's exhortation
We therefore are under obligation to be the light of the world by the modesty of our behavious, the fervour of our charity, the innocence of our lives, and the example of our virtues.

Thus shall we be able to raise the lowered prestige of the Catholic Church, and to build up again the ruins that others by their vices have caused. Other by their wickedness have branded the Catholic Faith with a mark of shame, we must strive with all our strength to cleanse it from its ignominy and to restore it to its pristine glory.
Posted by leutgeb at 16:12 No comments: 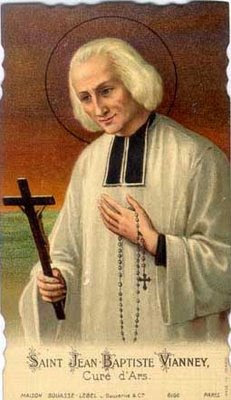 I like the accompaniments from 'Accompagnement du Kyriale Vatican' by Dom Desrocquettes of Solesmes and Henri Potiron from the Sacre Coeur, pub 1929 a lot too.

The introduction says don't be looking for parallel fifths (but it's what I do for a living!) and now and then they give you alternatives and they tell you that their versions are really just starting points for your own accompaniments, which is rather nice.

I'm still training myself not to see a quaver on its own at the beginning of a phrase as a weak beat.

Of course it's all backwards, because I should have grown up singing all this stuff and then progressed to playing it. Instead I often end up playing things first, though yesterday I did find an MP3 of the Gloria in the right key, put the lap top on top of the piano and had a go at accompanying some elderly French (judging by the pronunciation) Monks, which was helpful in getting into the ebb and flow of the music. They were singing in a big acoustic, so were luxuriating somewhat!

Rome Reports on the Treloars 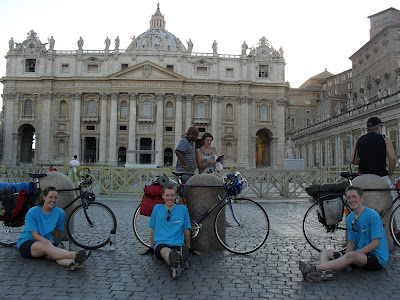 Not the Treo-lars, though there were three of them and they do all sing...
Posted by leutgeb at 20:40 No comments:

Just seen this on fb

The Papal Visit We have been contacted by the BBC looking for people willing to be interviewees. They would be people from the 5 BBC areas and would include young people too....in total they are looking for 200 people, so if your interested in taking part contact. clare.ward@cbcew.org.uk and we can tell you more...
Posted by leutgeb at 19:13 2 comments: 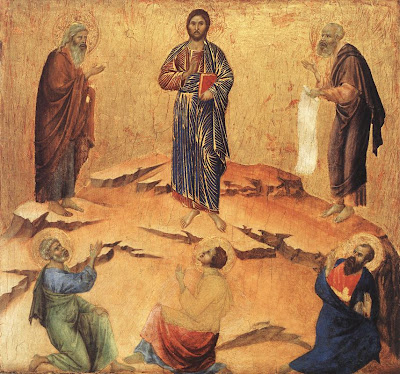 A Training Video for Catholic Voices

I also saw Mgr Patrick Burke yesterday and was reminded of this tour de force performance on Newsnight.
Posted by leutgeb at 09:50 1 comment:

A trip to Woldingham

Having read Mac's post the other day about James MacMillan, (and if you don't think he's one big composer, take a look at the list of performances of his works on the Boosey & Hawkes website. This guy gets 2nd, 3rd, 4th...performances of his music all over the world and The Confession of Isabel Gowdie is an A Level Set work for OCR) I thought that would be a talk I'd like to hear.

A couple of hours later the phone went and it was Friend-round-corner asking me if I wanted to go for the day with her and her family. Interesting, the turn of events sometimes and not one but two new Priests were giving First Blessings after the Mass.

Anyway, the talk was very interesting and it's always great to hear a composer talking about his work and then playing bits. On the way home I said to the boys in the car that that composer is writing the Mass for the Pope and they were very impressed. 'Woah,'they chorused.

'Gregorian Chant; the sound of Roman Catholicism.' That was well worth hearing.

Also thought provoking was the observation that when composers are studied their religious belief is ignored, or religated to a foible.

I shall be buying the Mass when it's published.

Oh, yes and claim to fame I even spoke to him and he has seen this blog.
Happy Feast of St Dominic!

PS The Gloria is through composed and I think we can safely assume does not include clapping. Hurrah, round of applause! :-)
Posted by leutgeb at 08:50 2 comments: 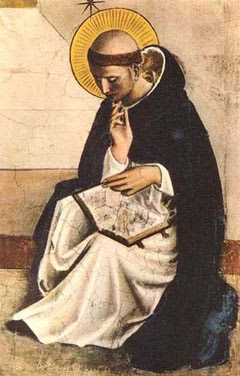 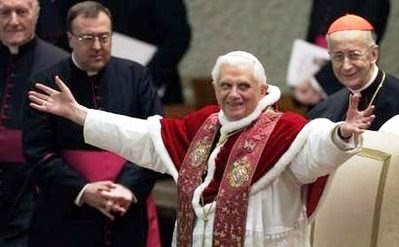 Time to change that methinks. Seen it on lots of other blogs, including two yesterday.
Posted by leutgeb at 08:10 No comments: 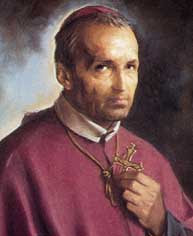