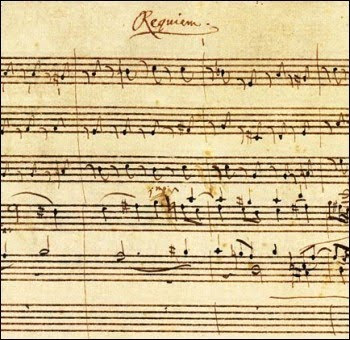 One of the pleasures of my job is that I get to play, or sing and sometimes conduct great music.

On the stand this term is the Mozart Requiem. This time I play viola. The last two occsions I sang, so an old friend from a new perspective. It's just wonderful stuff.

Here's the opening with John Eliot Gardiner. A bit quick, but that's period instruments for you. I'm still recovering from the lack of rit at the end of the Brandenburg 2 he did at the Proms last summer. It just slammed into the buffers.

Having received my education in reverse on the Requiem texts, in that I sang the Faure and Mozart Requiems and played the Berlioz Symphonie Fantastique with the Dies Irae quote in my teens, then heard the Requiem Mass in its liturgical setting in my late thirties, things are beginning to come together at last.
Posted by leutgeb at 18:28