Reading the book in the place described 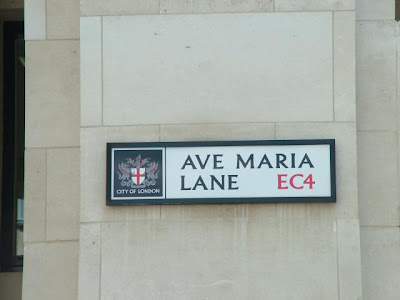 A while back I was reading Robert Hugh Benson's 'Come rack, come rope!' in the Starbucks next to St Paul's Cathedral. At that point in the book the characters were in the Cathedral lamenting how all the side altars and statues had been removed. Arguably, we are in an even worse state since the old catherdal burnt down.

We still have Amen Corner, Ave Maria Lane and Pater Noster Square named after the area where rosaries were made, so I have been told.

The other day I was reading Robert Hugh Benson's, 'Lord of the world,' in a cafe down the road from Westminster Cathedral when the book, you guessed it, described said cathedral.

It's like thinking of a piece of music and then turing on the radio and there it is.
Posted by leutgeb at 15:46

Why would the loss of side altars be lamented? Confessedly, if, as in Spanish Place, they have some aesthetic merit, I can understand, but they are relics of a time when Liturgy, as a corporate act involving the whole Christian community, was vastly misunderstood and replaced with a series of low Masses instead of sung Office.

Although I agree that new St Paul's is a monstrosity and not fit to be compared with the old Norman cathedral.

Why would the loss of side altars be lamented?

Well they have been consecrated and contain relics, never mind being relics of a time, they contain relics of particular saints. Some of us have quaint ideas that turning altar stones into paving slabs is wrong.

The loss of side altars signified that priests were no longer celebrating Mass there which to recusant Catholics was something to lament, plus the priest amongst them had a price on his head and is executed at the end of the book.

I see no contradiction between low mass and the office, sung or recited. Surely a both and situation?

I'd be happy for a return to merrie England. Living in a Catholic country must be great.