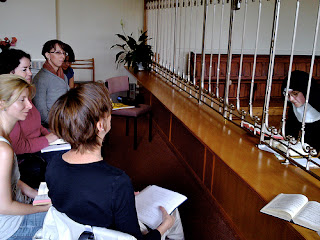 The schola makes p.10 of the Herald.

PS The unseen people here are the Sisters at Ryde of course.  It was Sr Bernadette who schooled us in the propers, (slightly unclearly described, we did sing them all,) and who suggested Mass XV because the gloria is the one used as the melody for the gloria in the new translation.
Posted by leutgeb at 19:34