One of the things about being a Catholic that I take for granted, til interfered with, is that I can walk into any Catholic Church or Cathedral unhindered and get on with whatever it might be that I'm there for and that so can anyone else.  On the very rare occasion when someone feels they have to hand me a piece of paper or talk to me, I'm a bit surprised. My Grandmother was so surprised when this happened to her one time that she turned round to look at me whilst walking forwards and tripped on a chair.  See what happens when folks transgress? Bad stuff.

Anyway, one thing that seems to upset people about the Old Mass/EF/TLM is that in the bad old days people, especially those pesky elderly ladies who go to Mass every single day, used to say the rosary during Mass.  Now I have bad news for those complaining people, particulary the ones who like to taunt priests with letters of complaint, you know the sort, because I have seen pesky elderly ladies who are at Mass every time I'm there, with said beads in their hands at the OF.   Did no-one tell them that all stopped 40 years ago?  Evidently not.  What's even worse is that some people who are not well above retirement age  also have rosaries in their hands. Dear oh dear. (Some people like me have them in their coat pockets.  )

So though it will be hard to start with, I think some airport style security is needed to weed out potential trouble-making bead-tellers at the door. 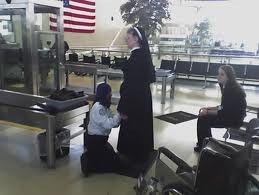 I'm debating what the alarm should sound like.  Probably the tritone at the start of 'On eagles wings.'

Other problems on the shopping list, which occur in both forms of the Mass, but particularly the EF.
Priests celebrating Mass in either form with their back to the congregation. It's just so rude. That's why despite the fact it's been explained to me umpteen times I'm still saying it.
Big candle sticks on the Altar which block my view. (OF versus populum.)
Too much Latin - a handy Latinometer is needed.
Maniples.
No chatty bits to tell me what to do, because I find it impossible to watch other people and copy them when I'm unsure.
It's just too quiet.
They didn't do any of this in the Early Church, but I'm not going to define how early or where exactly geographically.  OK just after breakfast in the Near East.
I don't like the silence.
We never get my favourite hymns.
I don't like the organ.
I'm sure the next Pope will change everything and then you will see that I am right. The Tablet has an article about the next Pope this week......
Posted by leutgeb at 00:23

Sad but true and you gave me a good laugh. Thank you. Happy New Year.