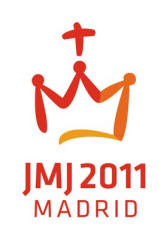 1997 One of my brothers was in Paris and I phoned BBC News about their very rude item describing Blessed JPII visiting the grave of Prof Jerome Lejeune.

2000 I went to Rome and, on coming home, complained that BBC Radio News were pumping up a non-existent story about people wanting to have a meeting about child abuse with Cardinal Murphy-O'Connor. There were about 12 of them and he said, 'yes.' There were 6000 UK Pilgrims in Rome and we didn't get the same elevel of coverage. I pointed out that the Holy See broadcasts in English and perhaps they could borrow some commentary. I heard one passage of re-broadcast Vatican stuff when Pius XII was declared Venerable.

It's hot.
It's raining.
It's costing lots.
There are protests.

Any Welsh pilgrims at all?

Thanks. I'll just read the sermons myself then.
Posted by leutgeb at 19:29

Welsh Pilgrims? Not absolutely certain but the pictures of young people on their knees saying the rosary and being harangued by some strange person - were, in fact Welsh pilgrims- good for them!

Good for them indeed.

What makes you think that they were Welsh - a give away flag - as they went to see Y Pab Bened?

Actually it was a report on another blog (maybe Fr Z's) that quoted two names both of whom are known to me as young Welsh pilgrims. I await their return to hear the whole story.