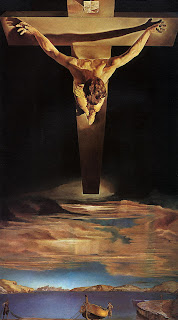 When I was in the Infants, this picture was at the end of the corridor. You had to walk past it to get to the Hall and the Headmaster's office (gulp.)

Being short in stature - we did measuring in Infant 3 and I was 120cm - how very metric we were - , I only ever saw the bottom bit of the picture, with the water and the boat and the general blueness. Also in my mind at the time, this being the mid 1970s, were I think, the posters for the film 'Jaws' and somehow it all got jumbled up in my mind.

This story doesn't have a particular point. Have famous religious art up in schools, because children take in what is around them. Hang pictures lower down for infants? Occasionally, get children to look at a whole picture? Or just have it there so that when they see it later in life they realise they have seen it before? They went for the last option and I have no complaints.
Posted by leutgeb at 19:41