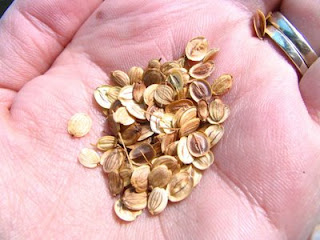 That's not my hand anyway, cos that's a married hand.
Very partial to them roasted (parsnips, not hands,) so bought some seeds.
The planting to digging out couch grass ratio is presently standing at about 1:100
It's great stuff because of course then you have to keep pulling out all the stuff you missed the first time.
According to my web research if you keep doing this for about four months, you win or you put down scary weedkiller, which would be OK if I was planting non-edible things, but it does take the edge off yer home grown veggies.
Looking forward to August.
Anyway, having dug enough to put the third puny row of potatoes in ( do they know how much work it is to put 2' between rows?) it was time for some parsnips. A mere 90 further minutes of digging and I had enough space for one row.
Got out the packet, poured a few into my hand, mindful that after thinning there should be 6-8" between them and a freak gust of wind blew a third of the packet onto the ground. Scraped them up and planted most of them. So, if you suddenly have a parsnip pop up in your garden you know how it happened. As you can see they are the sort of seeds that get air born easily.
Posted by leutgeb at 18:39

Oooooooh... I didn't know parsnips grew from seeds... I thought they grew from eyes in the root, like potatoes...

If you leave them in the ground for a second year they get flowers and then seeds...

Despite buying them from the hippy seed savers somewhere in SW Wales, I shall not be going down that path.

Parsnips are massively unfashionable, probably because they tend to get boiled to death and served like some whiskery albino carrot. But I love 'em. They're great if shaved on a potato peeler, blanched, dressed and served with parma ham.

Why can I think of nothing but food in Holy Week ...?

Mm will have to try the parma ham trick.

I tend to chuck a few in with the roast pots. Also good with honey.

Neat garden! Years ago a childhood friend of mine had thrown away the remains of the innards of a carved pumpkin....the next year with NO "maintenence" she had pumpkins growing where the can had been...