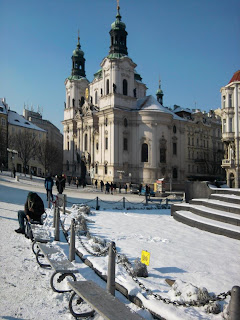 It was cold outside, about -10C.  More chilly than I am used to.

We had a great time and my personal highlight was hearing the Czech Philharmonic in the Rudolfinum. Wonderful sound from a very happy orchestra, really at ease with its conductor. Great great hall too.

Arriving at the airport yesterday to get a coach back to school, I was thinking that it would be plain sailing from now on.  No-one had been really ill, got run over, lost, been misplaced on the Metro or got over tired, cold.... you have no idea.  We went to a folklore evening and had to cross a country road with no traffic on it at all.  Then a car came round a corner going at about 50mph with 6 boys in the middle of the road.  Miss Leutgeb shouts, they movepronto and no-one got run down.

And then we came home...

I went with the non-EU passport holders to their queue, which I almost didn't do because having got them into the Czech Republic wasn't think getting them back into the UK would be a problem.  Chatted, whilst we queued, about this and that.  Got to the front of the queue, presented my passport and explained why I was there, boy 1 presents passport and goes to baggage reclaim, boy 2 (who isn't well and is running a temperature,)announces that he can't find his. We go through his pockets, because he can't actually be without it, he's just filled in a landing card on the plane after all.  He doesn't have it.  I get out out the photocopy of his passport and visa and the trip list on headed note paper, stamped with the school stamp and signed by HM, because after all I'm not his mother so could be some people trafficker/ child abductor type person, maybe there's a custody battle going on and the dad has the passport, who knows what the story could be.  The visa that I have a copy of is the one for Europe, not the one giving residency rights in the UK, this is getting better.  I check that the boy didn't go to the toilet when he got off the flight and leave it there.  We tell the nice border man the flight number and he disappears with my paperwork.  Boy is now telling me how his parents will kill him and how he's never lost anything before.  I point out that he is unwell and stuff happens when you are ill, besides which, his parents can't kill him, because we can't enter the UK.  Always there with the gallows humour, me. Phone colleague to explain.  He's waiting with everyone else and has our bags.  I'm already thinking that if this turns into a long night, they will have to go on the coach (Mummys and Daddys will be massing outside school,)and his parents will have to come or we will be taking a train back to where we need to be. Nice border man comes back and says that they've found it on the plane and I explain that the boy is ill.  Nice border man offers us a drink, tea or coffee or water. We go for water. Don't want to push our luck and anyway I can't wait for a kettle to boil, there are 27 people waiting for us at baggage reclaim, plus Mummys at school.  Passport arrives.  Boy calls nice border man sir lots of times and we exit.  Boy is most insistent that I don't tell his parents and I say I won't because, he didn't do it deliberately and no harm was done, there are no consequences from the the incident and anyway, he's ill. And just in case parents are now worrying about what teachers don't tell them, I would (and have) tell parents anything and everything relating to their child if they were in any sort of danger whatsoever or were ill or upset or had done anything really awful <- pupils take note.  I hope he tells them though, because though I was sympathetic and got it sorted, he was pretty shaken and it's a great shame not to have your parents' support when something quite scary happens.

PS If you are on a school trip I found out that you can take the whole party through the same channel at passports whatever nationality they are.  Learn something new everyday.
Posted by leutgeb at 13:49