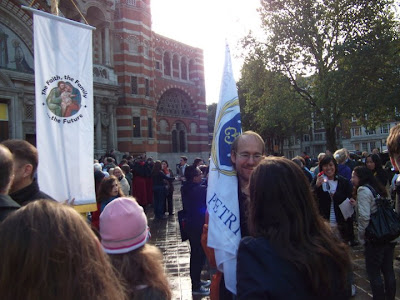 aka Rally, well you know what I mean.

Anyway, it was very good, of course. Can't beat a good procession with squillions of people and lots of singing ending up in one if not the most beautiful churches in London for Benediction.

Having nearly felled an unsuspecting priest (who took this photo which I've 'borrowed' off fb, *cough*,)when it slipped its perch on a buggy, I got to carry the banner above left for a bit. It was quite heavy and very tall, so I had to do battle to keep it perpendicular to the road when it got windy and not take out any fellow rosary prayees around me.

Anyway, we said the rosary and sang various Marian hymns on the way to the Oratory, via roads with embassies and v posh shops. I always find it somehow fantastical that people actually buy stuff in those shops, but this is Knightbridge/Belgravia and not Bluewater. Chanel, Gucci, Prada, they aren't real to me.

The Oratory was full in an every possible surface that could be sat on had a person on it kinda way. I sat on a kneeler in a side chapel, a positive luxury after Cofton Park!

After Benediction, a sermon and lots more hymns it was time to go. I had a chat with Dominic Mary, to whom I have never actually spoken in real life. Always good to put the sound of someone's voice to their blog and he of course knows lots of people in Blackfen, most of whom were there and some were even altar servers. Those guys certainly get around.

Then I was able to visit the new chapel to Blessed John Henry Newman and as a bonus bumped into he who the retired organist refers to as Cantataman. We like to think of him as a plainchant superhero. Gregorian propers, Litany of the Saints and Benediction and he could still sing more if asked, though he responds positively if offered a pint of Masterbrew in the club. This meant that I was able to check which Mass Ordinary it is next Thurs and Sat. IV as it goes.
Posted by leutgeb at 19:31

The privilege was mine, leutgeb, and the chat was much enjoyed . . . I look forward to a longer one at some point; but more immediately, to seeing you during the Quarant 'Ore, assuming that I'm fortunate enough to get there, as I definitely want to.