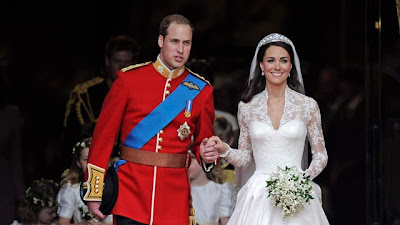 *cough* for someone whose life is often dominated by being in the right classroom at the right time, I was late getting home this am and switched the radio on in time for Ubi caritas... my favourite tune of the moment, but in a different setting here. I was sorry to have missed 'I was glad.' Oh well.

It all looked great and I wished in a way that I'd gone into London. Will take a peek down The Mall tomorrow morning on the way somewhere. Beautiful dress too.

When I did my shoulder in and ended up in Ysbyty Gwynedd Bangor two years ago, a man had been helicoptered in from the Little Orme in Llandudno where he had fallen whilst out for a walk and broken his leg. The nurses told him that he could have been flown in by Prince William, but it obviously wasn't his shift that day. A member of my familiy, whose favourite internet pastime is looking at the traffic cameras on the A55 (North Wales Expressway) to check out the weather and such like, also enjoys the BBC NW Wales website, which it should be said is of specialised interest. Lots of K&W news there.

Such events also make me think of Grandma, who was a great Royal fashion watcher. On one famous Xmas Day in the 80s, as we squeazed into my Uncle and Aunt's lounge for The Speech, she was heard to say, 'The poor Queen...' Turned out that the telly was on its last legs and that in addition to turning everyone a bit yellow, the horizantal hold had gone a bit funny rendering the Queen and Duke of E a bit squashed. Didn't do much for the James Bond film that followed either.
Posted by leutgeb at 20:24