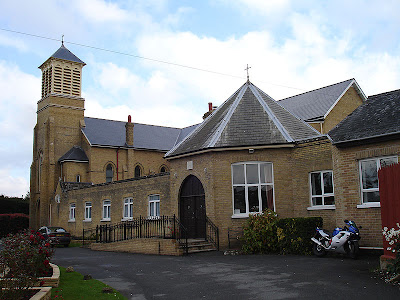 I have a friend who has a list of things she'd like to achieve, which has over the years included parachuting and running the London marathon twice. I have more modest ambitions which have included taking my car on a car ferry. I have now achieved this impressive feat, by driving to the Isle of Wight. (Round of applause please.)

Anyway the main object of this journey was chant and so off we set on Friday. This was another Candy initiative, btw. We sang Mass with the monks at Quarr and learnt about chant from the choirmistress at St Cecilia's as well as going to Compline at Quarr and Vespers at St Cecilia's.

Some things we leant.

Say the words and then sing them. Especially good when the text is syllabic. (Which is also what was said by Dom Saulnier at Solesmes.)

Where the text is set mainly syllabically with a few melismas, the melismatic notes should be lighter and a little faster.

Quliismas may be thought of as stepping over a puddle. IE the notes before and after the quilisma carry more weight than the quilisma itself.

Avoid causing the music to stop at the end of the first phrase of 'Veni Sancte Spiritus.'

Thank you to Candy, Quarr and St Cecilia's.

Clare, as ever, took great photos showing the sky to be a deep blue.
Posted by leutgeb at 07:57

Ah yes, "Veni Sancte Spiritus" (now where is the music, what's the next bit, do we start again now) "et emitte caelitus"

One of my relatives who is a fairly learned music type suggested that the quilisma was in fact an indication of vibrato - the shape of the symbol suggests as much - but I expect that would be close to heresy for monasteries in the Solesmes tradition.

There is yet another idea that the quilisma may indicate some variation in the pitch, perhaps something less than a semitone, which would fit into a more Middle Eastern sense of tonality, which is where is all started after all.

Vibrato?! Solesmes have got rid of episemes from their latest editions because to paraphrase Dom Saulnier, ' It is not so easy to get 50 monks to sing something rhythmically subtle.'